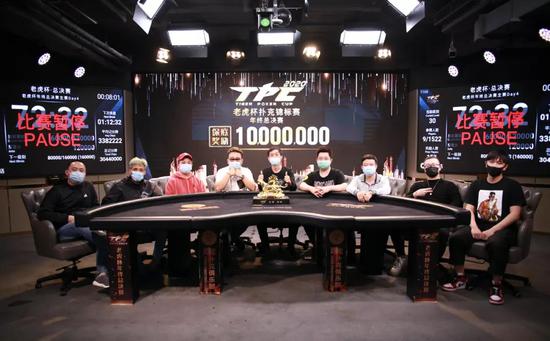 The same 27 people came to this competition day. The 547 runners participated in the running cup which took 9 hours to produce the final champion. The main event took 12 hours to give birth to the final FT~Wu Xiao and Xu Lei Last year's finals FT players returned to their familiar positions again. This time, I wonder if they can make up for the trophy they missed last time, and the other 7 advanced players have the opportunity to create their own history.

Huang Xinglong regrets that he became the first player to get out today. At the level of 12k/24k/24k, he went all-in for about 40w at HJ position and was called by CO at 88. He showed AQ and the board was not out. He stopped at 27th. name.

Guo Qizhi, who had won the main match runner-up in the National Cup Taizhou Station, was out afterwards. In the 25th level, the blinds were 2w/4w/4w, the CO position was open, he 3-bet in the bank position, and He Ming SB chose all-in, CO The first fold, Guo Qizhi called with 99, He Ming AA, there was no accident on the board, Guo Qizhi was eliminated.

Beijing player "17" fell to 18th place. He went all-in for 46w with A9o in HJ position, and was called by BB Xu Lei with 66. The public card did not issue outs, and 17 was regrettably out.

Although he has been below the average size, Super Black has been waiting for a chance to double. After doubling with AA and Xiaohei’s TT before the flop, his scoreboard did not exceed 100w. After struggling to support it, he reached 25k. /50k/50k, he opened11w at UTG position, fold to SB position Xu Lei called, and the flop was 5♣️6♣️T♣️. After Xu Lei checked, he bet 8w in Super Black and Xu Lei chose to go all in. Super black called bright K♦️K♣️, Xu Lei 5♥️6♥️, turn 9♦️ river card A♥️, super black stopped 15th.

After Zhang Shiqi used AK and Xu Lei's AA to finish before the flop, he was eliminated by Xu Lei and he stopped in 13th place.

The 10-man table stage lasted for nearly 4 hours before the FT bubble occurred. During this period, Xia Jie, who had been in the short yard, used AK all-in at MP and was called by Xiao Hei with 56o at BB. Xia Jie successfully doubled. After that, Tan Chuning went straight to 320w in SB position, He Ming called after BB about 110w, Tan Chuning Q6s, He Ming A6o, the board J♣️8♠️K♥️Q♣️4♥️, Tan Chuning hit the reversal, He Ming stopped. 10th place.

The double main running cup produced the final champion in 9 hours of battle. Chen Yong defeated his opponent Zhao Yu in the heads-up and took away this impressive trophy and won the 42w travel fund reward.

The best players will live video live of the 2020 TPC Tiger Cup Finals. The live broadcast platforms will be China Sports (zhibo.tv/10777) and Bilibili (live.bilibili.com/22306768)